Where is my Labia? – And other questions about the Female Anatomy 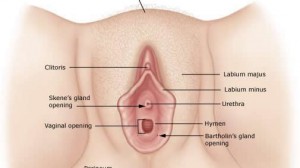 Many people have questions about the female anatomy, even women.  Understanding the makeup of the female anatomy is essential, especially if you are considering labiaplasty or other plastic surgery procedures in that area.

“Vulva” refers to the outside area of the vagina (shown above).

The main parts of your vulva include:

Labia Majora: The very top of your vagina is called the “mons” and if you continue down around the area where your pubic hair grows, you will find your labia majora. Literally meaning “large lips”, the labia majora enclose and protect the other external reproductive organs. The labia majora contain sweat and oil-secreting glands. After puberty, the labia majora are covered with hair.

Labia minora: Literally translated as “small lips”, the labia minora can be very small or up to 2 inches wide. They lie just inside the labia majora, and surround the openings to the vagina (the canal that joins the lower part of the uterus to the outside of the body) and urethra (the tube that carries urine from the bladder to the outside of the body). If you pull your labia majora apart you will find a part that looks a bit like flower petals, or tiny tongues. They vary in size, shape and color, but resemble flower petals and can range in color from a purple, pink, brown, or red. The purpose of your labia minora is to protect your vagina from bacteria.

Clitoris: The famous “clit” or clitoris can be found where your two labia minora meet. The clitoris is a small protrusion that is comparable to the penis in males. The clitoris is covered by a fold of skin, called the prepuce, which is similar to the foreskin at the end of the penis. Like the penis, the clitoris is very sensitive to stimulation and can become erect.