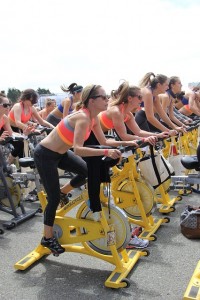 Labiaplasty used to be a cosmetic procedure that most women shy away from in the past decade. It involves the removal of extra folds in the vagina for aesthetic purposes. Just recently, a spike of 200% was observed by cosmetic surgeons nationwide, and they all had something to do with various reasons. One of the most prominent reasons that stood out was that some of the women have enrolled in spin classes. According to Dr. Usha Rajagopal, a well-known cosmetic surgeon, there are several benefits to having labiaplasty:

Are Spin Classes The Reason Labiaplasty Surgery Procedures Are Up 200%?

1. Most women who do spin classes wear tight-fit clothing that makes them conscious about the appearance of their vagina

During spin classes, some women prefer to wear leggings or speedos to help improve their performance. Some women feel conscious about the appearance of their womanly parts especially if they feel like it gives off a “camel toe” look. This is considered something weird or unattractive for some women, especially for the girls who may be a little on the heavy side. The appearance of several folds even when underwear is worn underneath may be something unsightly to be seen by others.

2. Spin classes involve moving the legs quickly, which can cause a discomfort when the vagina has many folds

Another possible reason why women who do spin classes opt to do labiaplasty is that of the discomfort they experience during the pedaling motion or cycling. As the legs move quickly, there is a friction between the vaginal folds or between the legs and the folds. This gives off an uncomfortable sensation which may be not ideal during workout sessions. Some women report having rashes or blisters due to this constant friction. Dr. Usha Rajagopal mentioned that cosmetic surgery can help eradicate this problem not only for spin classes by also for high-friction lower body activities.

3. Labiaplasty is a trend among the spin class crowd

Aside from extra vaginal folds causing a great discomfort for women who do spin classes, it also became an increasing trend for the spin-exercising population. Since women are more open with their cosmetic or surgical procedures, this is not an issue that is simply swept under the rug. When women ask questions about others’ appearance, they may perhaps have heard information about labiaplasty and its benefits. Thus, it is increasingly becoming a trend in the spinning women crowd. Although it is relatively new, it is slowly catching fire not just for women who have active lifestyles, but also those who are perfectionists in their physical appearance.

4. Some women feel discomfort even in casual clothing

Some women often experience discomfort when they sweat in their private parts or after peeing. This is because of the added friction in the vaginal area, which is not only caused by tight-fit clothing but also when wearing casual clothes. Since the spin class women are more conscious of their physical appearance, a lot of them report to having this dilemma even in their everyday clothing as well. When women lose weight, some of them tend to have overall looser skin, and this can also affect the vaginal area. Discomfort may be present in all types of clothing in this case.

Spin classes, though high-intensity in nature, offer a workout that’s more focused on the lower body. Since women who do spin classes focus on their lower body, they tend to be more conscious about their lower body parts, such as their vaginal area. As people lose weight, the labiaplasty also helps in additionally improving their appearance during the process.

If you are part of the spinning crowd or are interested in availing labiaplasty procedures, be sure to ask information with a trusted doctor, Dr. Usha Rajagopal. She is one of the most prominent cosmetic surgeons in the San Francisco area.

« The Evolution of Cosmetic Gynecology